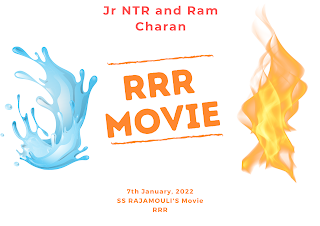 Jr NTR and Ram Charn are in the main lead of Biggest action drama RRR Movie. Ajay Devgan and Alia Bhatt both are playing an important supporting roles in RRR Movie.

Director SS Rajamouli the Biggest name in Indian Directors who show his magic and passion with the evergreen Bahubali series. And also we expect better and more huge from Director SS Rajamouli for RRR Movie. As SS Rajamouli takes too much Time to Make RRR Movie and There is two Biggest Name in Tollywood Film Industry Jr NTR and Ram Charan are in the Main Lead.

Jr NTR aka Nandamuri Tarak Ramarao the biggest star in Tollywood Film Industry; Jr NTR has a huge fan following in Mass fans, A Young Tiger Jr NTR is known as a #ManOfMassesNTR for Mass Expression, Mass Dialogue Delivery, Mass Action, Emotions, An actor who plays with his eyes in character an Intesity in his eyes is unmatchable and a dancing! Jr NTR will be seen as a Komaram Bheem a Freedom Fighter Which will be huge in the Indian Film Industry! RRR Movie is the 4th movie of Jr NTR with Director SS Rajamouli!

A Bollywood Superstar Ajay Devgan will be seen as a supporting role and important character in RRR Movie. After seen a small clip of Ajay Devgan from the RRR Movie. We can say that this will be huge in the Indian Film Industry! Because Ajay Devgan knows for emotion and his intensity in Eyes!

Alia Bhatt is a gorgeous actress from Bollywood Film Industry. Alia Bhatt will be seen as a Sita in RRR Movie. There is a buzz that Alia Bhatt as Sita playing an important character in RRR Movie who has a scene with Both lead actors of RRR Movie, Jr NTR, and Ram Charan.

RRR Movie team finalized the date of RRR Releasing; After knowing that there are too many movies are to release on that week. SS Rajamouli shows his Confidence that India’s Biggest Action Drama RRR Movie makes All-Time Record in the Indian Film Industry!

Jr NTR and Ram Charan recently said in a Tollywood show Jr NTR Host ‘Meelo Evaru Koteeswarudu‘ 2022. That the RRR Movie will be made a History in Indian Film Industry!